Another addition to the Spanish Black Sea's fleet, this time the mighty Santisima Trinidad, a 1st Rate armed with 140 cannons. Built in 1769 by Mateo Mullan in Havana.

She took part in the Battle of Trafalgar on October 21, 1805, as part of the combined Franco-Spanish fleet. Her great size and position immediately ahead of the fleet flagship the French Bucentaure made her a target for the British fleet, and she came under concentrated attack by several ships.

The Santisima Trinidad lost her mast and eventually surrendered to the Neptune, commanded by Captain Thomas Fremantle. She was taken in tow by the Prince, but sank in a storm the day after the battle.

The model is truly a beast, must have been an impressive sight when it was afloat: 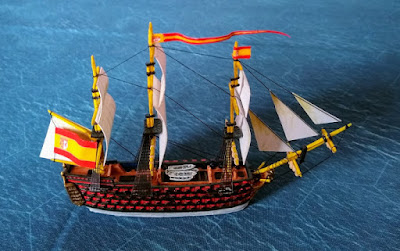 You can actually count the 140 guns (apart from the stern chasers anyway)! 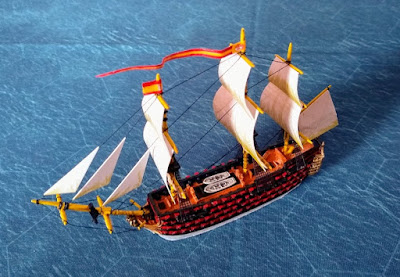 In company with a Brig to show just how huge it is: 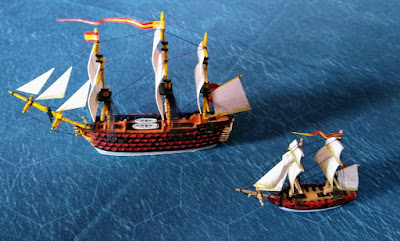 The fleet is now up to one 1st Rate, three 3rd Rates, three Frigates, four Brigs and two Merchantmen. I see Wayland Games will soon have the 'Spanish 3rd Rates of Renown' in stock so that will be a temptation as is buying the British Fleet box to give them some opposition.