DMH The Law and The Hole In The Wall Gang

Having enjoyed my solo game I thought I'd add two more gangs for Dead Man's Hand, firstly "The Law" featuring the Earp brothers:

supported by the Sheriff and a couple of Deputies:

These are all Artizan figures. I was intending to paint them all with a black theme but decided to do the Sheriff differently. I might repaint the coat on the Deputy with the shotgun to give them a bit more variety, he looks more like an undertaker than a lawman as it is!

When I ordered the figures for the Lawmen I noticed that Pulp Figures also did some Wild West figures so I added a pack of 'Vaqueros Americano's" to the order. These turned out to be really nice figures, full of action and reminding me in some ways of the old Timpo toy soldiers I had as a kid. They will form the nucleus of an Outlaw gang: 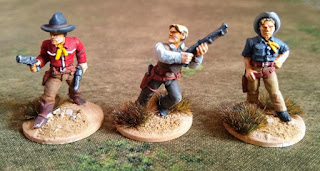 I had a couple of unpainted Artizan figures left over from last time I bought some so I added them into the gang (the last two figures on the right):

One thing I didn't notice until after I'd placed the order was that Pulp Figures also did some Mounties in a range called "Yukon Peril"! If I had noticed I would undoubtedly have ordered some and with lock-down looking to extend for a while I suspect that sooner rather than later I'll be adding some of them to my collection.......
Posted by Zanoni at 10:13