My fourth game of TMOCB saw the USMC taking on the NVA again. This time rather than take the M113 and extra men as supports for the USMC I took the sniper, artillery observer (both added to the platoon commander's group) and the extra men.

Initial deployment found the Americans rather spread out among the Vietnamese villages: 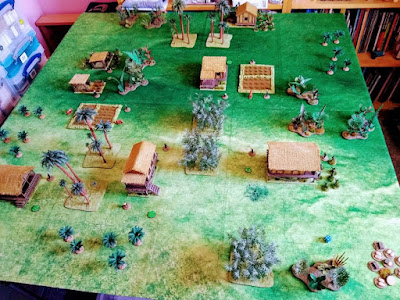 The Lieutenant interrogates a villager and finds a cache of food which his men quickly destroy: 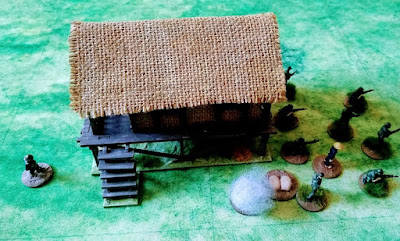 The second squad under Sergeant Elias also find a cache of food and destroy it: 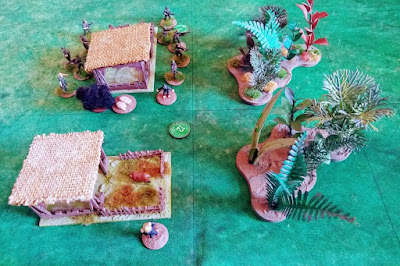 The NVA Platoon Commander move up through the jungle: 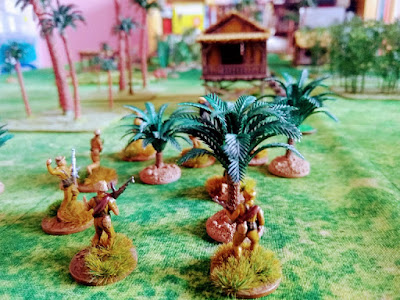 The NVA Commander calls down a mortar barrage on the village the US Platoon Commander is searching. It is very effective taking out two US bases and all FOUR peasants in the village. This tragic loss of civilian life is doubtless the fault of the Americans: 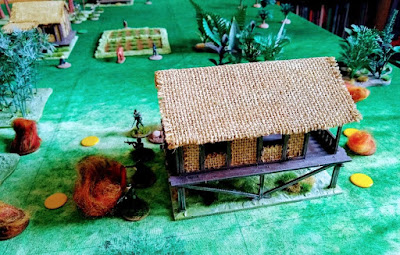 The Lieutenant retaliates with an artillery strike of his own but it is ineffective: 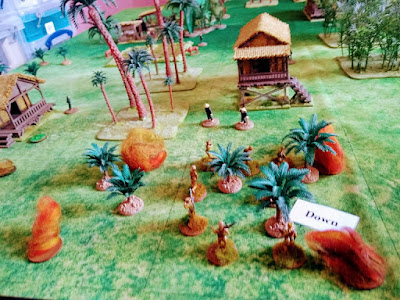 Sergeant Rambo and the 1st squad move into a village: 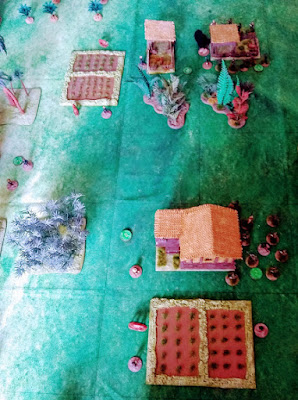 Another NVA mortar strike reduces the US Platoon Commander to a single base. The NVA commander advances upon his counterpart but loses a base to fire: 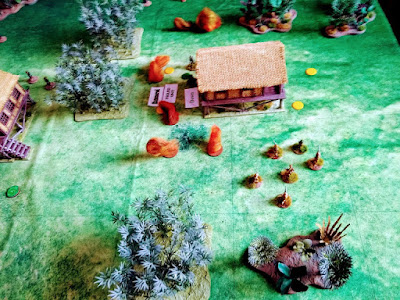 The NVA assault but the Lieutenant manages to fall back: 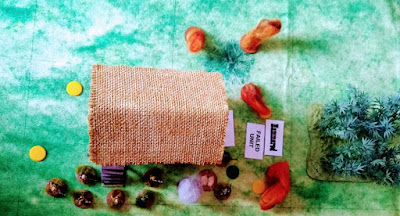 This time an US artillery strike hits the village and kills an NVA base: 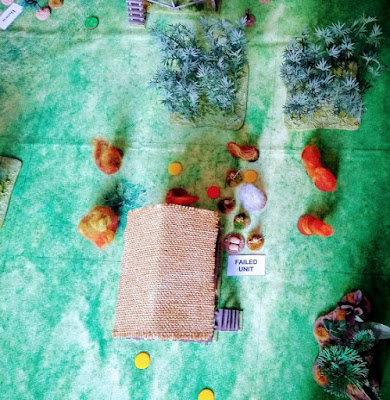 Rambo searches a village and discovers another food cache which he destroys. The Lieutenant has fallen back and is less exposed now: 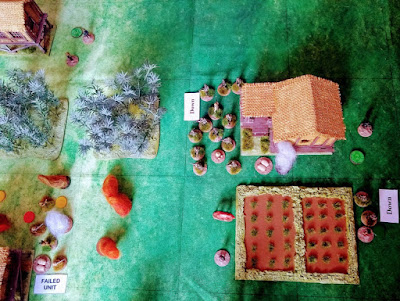 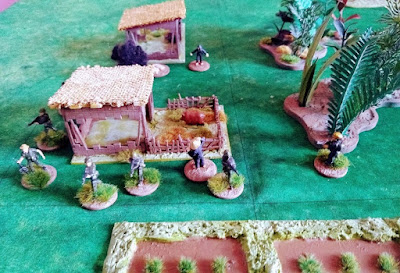 Another NVA squad has arrived and moves up through the village: 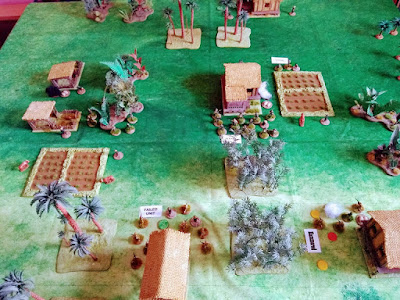 Sergeant Barnes arrives with the 3rd squad, discovers another food cache and destroys it: 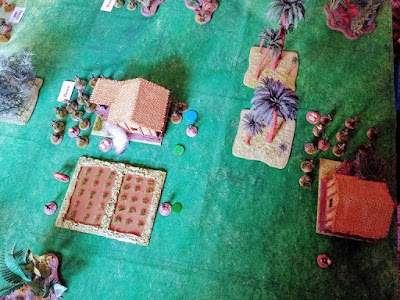 Rambo's 1st squad is hit by NVA mortar fire. Rambo and two other bases go down in the barrage!: 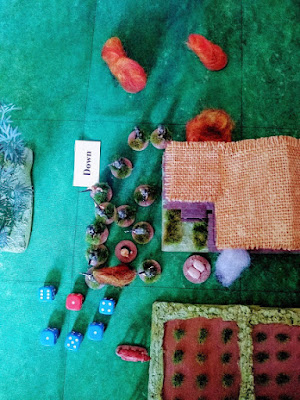 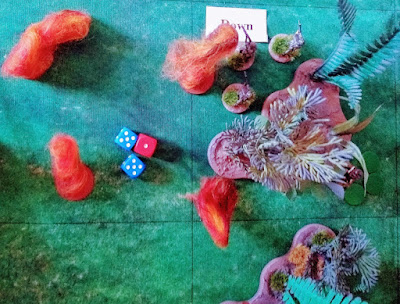 1st squad fights off an NVA assault but loses another base: 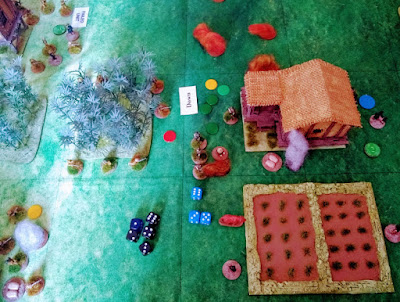 The Lieutenant calls in a Medivac Chopper which picks up Rambo and the other casualties under heavy fire: 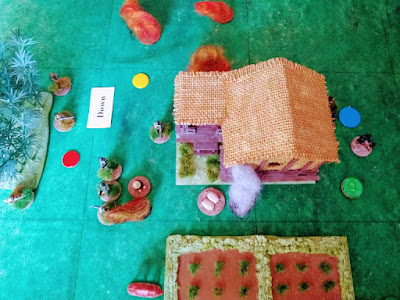 US artillery fire takes out the NVA platoon commander: 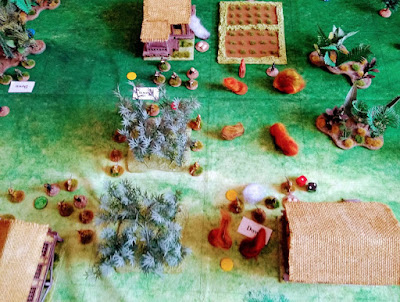 3rd Squad moves up to support the 1st Squad: 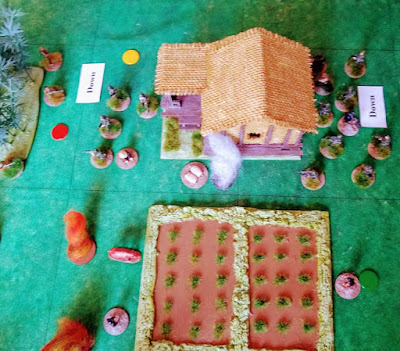 An NVA squad chases down the few survivors of the 1st Squad: 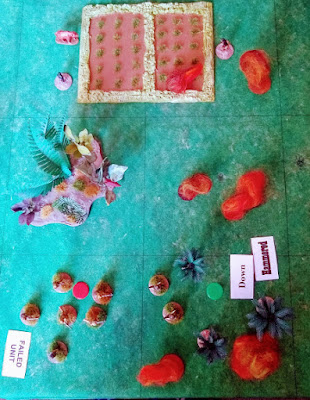 Another NVA squad attempts to catch the Lieutenant who is guarding an arms cache: 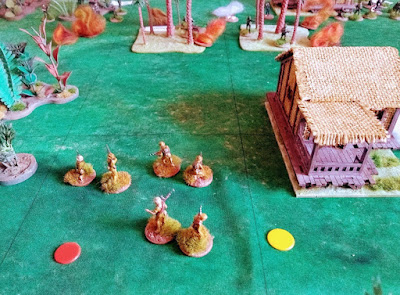 The survivors of the 1st Squad are wiped out: 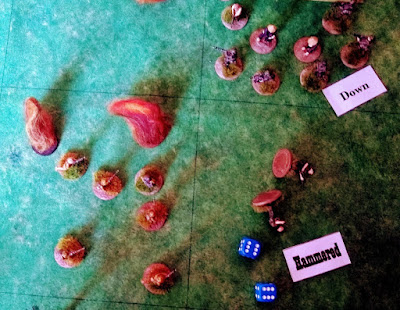 The last men of the 2nd Squad are also wiped out: 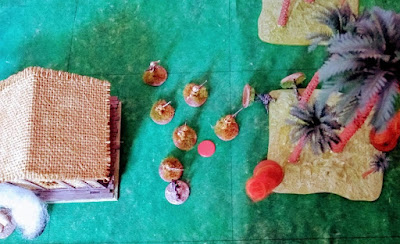 The game ends with the 3rd Squad and the Lieutenant hanging on in a village. The NVA have also taken losses though and fall back: 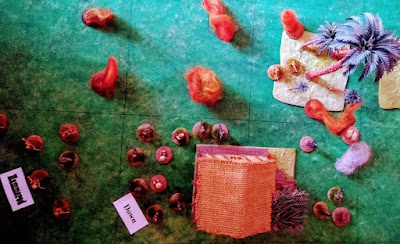 This game started well for the Americans then declined towards the end. The support choice probably worked better (otherwise the Lieutenant would have been wiped out very quickly). Positives for the Americans were that they searched a lot of villages, managed to evac the majority of casualties and found several caches. They did take a lot of casualties though and the numerous artillery strikes on both sides took out many peasants (which could have been more as I kept forgetting to check for peasant casualties when firing).

So a draw this time, much closer than the previous games and if the Americans had not lost two units in the last two moves they'd have managed a narrow win.

Having played four games now I think there is a fairly steep learning curve and you'd need to play a few games to get the hang of it (in which you'd probably get slaughtered against a player with experience) which may not be suitable for introducing at the club where I feel my potential opponents might only want to play very occasionally. Rommel is similar in that for an inexperienced player against an experienced one things can go very wrong very quickly!
Posted by Zanoni at 08:59