Ted wanted to try out a Norman Conquest army for an upcoming competition so I thought I'd take the opportunity to use Anglo-Danish and fight a mini-Hastings!

The Anglo-Danish list is very limited if you don't take any allies so I ended up with two commands of Huscarls and well-equipped Fryd armoured spearmen and a third the same but with some added poorly-equipped Fryd. I took the maximum number of archers/slingers/javelinmen so had a fairly large light infantry component.

The battlefield ended up fairly open (sadly no Senlac Hill for the English to stand on!) and deployment resulted in both armies pretty much lining up to charge each other: 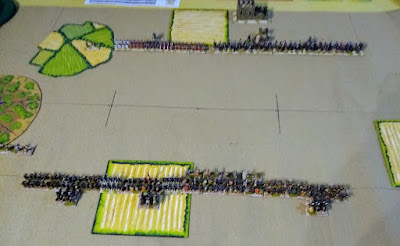 The English advance on their Norman adversaries:

The Norman's take up the challenge with their mounted rushing forward:

The lines close, English archery is ineffective against the Norman mounted:

The Norman knights crash into the English foot! The poorly equipped Fryd are in the centre of the line and may prove a weak point in the English line. The initial combats go well for the English though and the line holds steady:

Gaps start to appear in both lines. After the initial setbacks the Normans start to fight back especially against the poorer English foot:

The Norman foot join in the fight. The English overlap their line and the Huscarls should give them an advantage against the Normans:

The battle rages on. The English are gaining the upper hand but their foot are starting to struggle against the Norman knights:

Gaps appear in the English line, the poorly equipped Fryd are on the brink of routing:

Much of the English right and centre breaks and flees! However, the Normans have taken heavy losses and are on the edge of collapse:

The English attacks on the Norman foot continue, the end is in sight:

The Norman army breaks and flees, William will have to wait to become 'the Conqueror' and Harold remains King:

So pretty much a slogging match (which was fairly inevitable given the army compositions) where the English just held on for victory. The poorly equipped Fryd put up a good fight against the Norman knights but after the initial contact found it hard to damage the knights further given the quality and  armour disadvantage they had.
Posted by Zanoni at 01:53