For an upcoming game against Andy I realised that I didn't quite have enough Soviet armour for the scenario we planned to play. As a result a quick order to Pendraken was required providing the following extras for the next game. 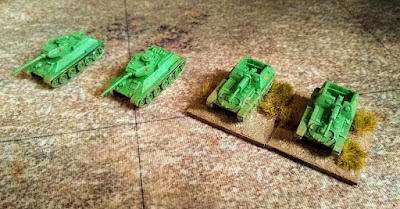 As ever quick to paint and look serviceable enough I think, I have run out of bases though so need to order some more for the T34/85's!
Posted by Zanoni at 05:54