Having decided not to add to my Black Sea's Spanish fleet I promptly saw that Warlord Games had released a box of two merchant ships which immediately broke my resolve!

I was curious about them as they (like the larger ships in the range) were resin hulls with metal masts which I didn't think would work well, my experience with the 28 mm resin and metal tanks being that the metal gun barrels had a great tendency to bend or snap which would be even more of a problem with the much heavier ship masts.

In fact they worked okay, the biggest problem being with the rigging where the masts bent when you tried to tighten the thread.

There were two ships in the box, firstly a smaller ship which I have christened 'Anna Augusta'. This was the first one I made and shows some of the problems I had with the rigging not being taut: 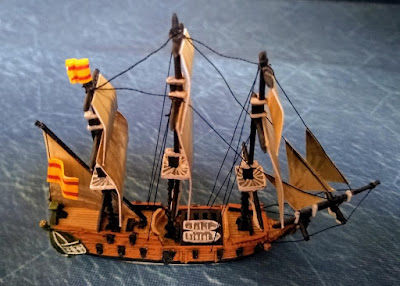 The second ship is a larger version and, after the experience of doing the first one, the rigging came out better. This one is the 'San Esteban': 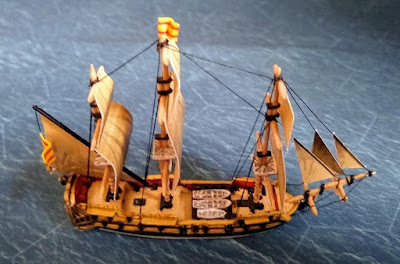 This brings the total fleet to twelve ships now. I have enjoyed making and painting them so it is possible there will be further additions!