Simon wanted a practice game for Warfare in November. The Period was 'Wars of Religion' and, unusually, it was a 650pt competition on a 5' x 3' table rather than the usual 800pts on a 6' x 4'.

I decided to use TYW French as, firstly, I had not used them for a long time and secondly even with the points reduction the army would be quite large at 13 battle groups and four generals.

Somewhat surprisingly Simon went for Early TYW Swedish, an army which even at 800pts is small, at 650pts it consisted of 11 battle groups and three generals.

The terrain fell fairly openly and both armies deployed with infantry centres and cavalry flanks. 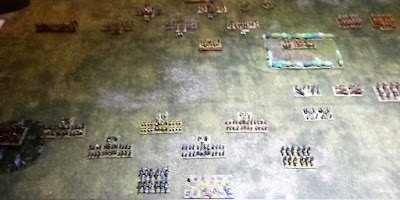 Initially my right flank fell back and the Musketeers moved over to support them. On the left my cavalry advanced while in the centre both infantry lines moved forwards. 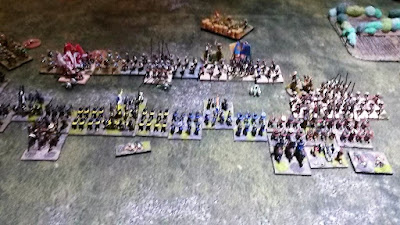 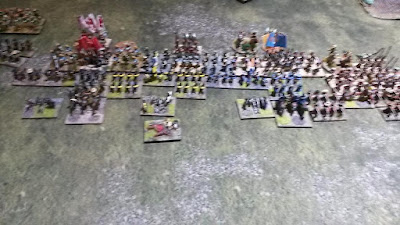 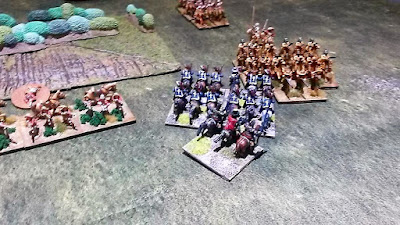 Meanwhile on the right the Musketeers have broken the first Swedish cavalry unit and pursued into the second in a successful charge. However the Musketeers couldn't save the French artillery who were shot down by Swedish dragoons. 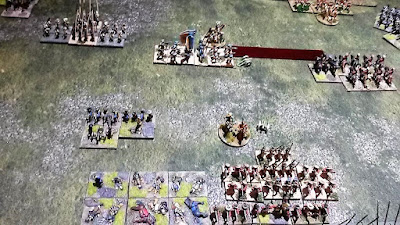 The French infantry line has now collapsed in the centre and right while the Swedish infantry have broken on the left. 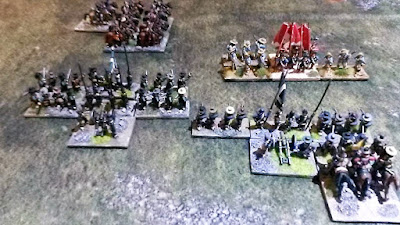 Both sides have now taken heavy losses. The Musketeers on the right break their second Swedish cavalry unit but, with the Swedish infantry poised to attack the French camp, it isn't quite enough to tip the Swedish into defeat and the French army breaks first.

A close game in which both sides had units explode unexpectedly quickly and Simon's better quality units just overcame my larger army and extra general. FoGR still gives a great game and the smaller points total together with the restricted table size ensured that the armies were quickly in action.
Posted by Zanoni at 23:44 No comments:

My first game of Sharp Practice since playing in the Britcon competition using my Peninsular French. For this game my opponent, Gary, wanted to use 60pts of Rebels so I picked a 60pt British force consisting  of three groups of eight British Regulars, one group of 6 British Light Infantry skirmishers and a group of eight British Light Dragoons plus associated officers.

We diced for which scenario to play and came up with the 'Escort' tasking the British with escorting the General's daughter to visit him. The battlefield consisted of a road running from my right where I initially deployed to the left, a farm in the centre of the table and the usual assorted fences and trees.

I deployed my three groups of Regulars in Line with the General's daughter, my Light Infantry on my right towards the farm and the Light Dragoons in reserve. 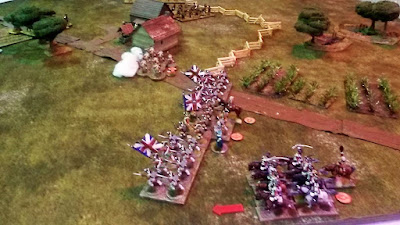 The Light Infantry quickly engaged a couple of Rebel skirmish units that appeared past the farm and started to whittle them down. Some Rebel Militia deployed in the farm enclosure on my far right and began to try to outflank my line. 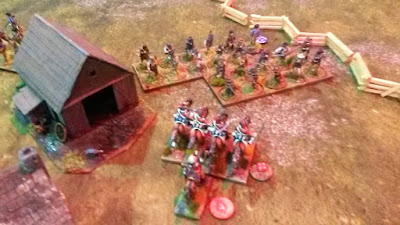 In an attempt to deal with the Militia before they became a serious problem I ordered the Light Dragoons to charge them. In our last encounter the Dragoons had wiped out two units of Rebel skirmishers which had unwisely deployed in the open opposite them. This time, however, the Dragoons charge fell agonisingly short and they received a volley at point blank range from the Militia which knocked four of them out of their saddles!

Meanwhile in the centre the British Regulars had driven off the Rebel skirmishers but more Rebels in the form of some State Line and Continental Line had arrived to contest the road causing the British Light Infantry to fall back. 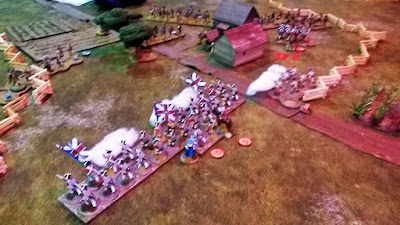 Despite losing half of their men in the attempted charge the Light Dragoons could perhaps still close with the Militia if their officer reacted quickly. Unfortunately the Militia commander was alert to the danger and another volley crashed into the Dragoons sending them fleeing back.

The situation was now looking desperate for the British. While the Line formation was holding it's own our right flank was now only held by the shaken Light Infantry who had the victorious Militia bearing down on them rapidly. While I was confident that my Line could deal with the State Line and the Continentals eventually the Militia would soon flank my Line and I had nothing left to oppose them.

It was therefore time for a last throw of the dice to get the General's daughter to safety. The left hand group of Regulars under the command of the Sergeant broke off and made a run for the table edge with the daughter in tow. Initially the attempt went well and the group successfully crossed the fence into open fields with nothing between them and safety! 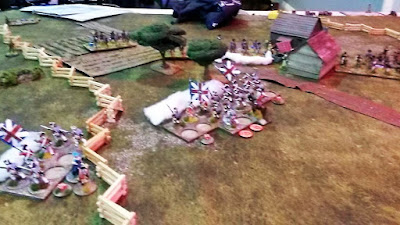 The gallant remainder of my Line was now taking fire from both the front and flank as the Militia opened fire again. The sergeant made a last dash for safety but came up short as my Line collapsed in the centre forcing the British to concede defeat! 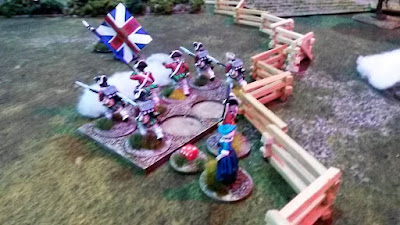 Another great game of SP in which our fortunes fluctuated throughout. There were two decisive actions, firstly the failure of my Light Dragoons to reach the militia and secondly the lack of action by my senior officer (in the last few turns his counter didn't appear at all!). If the Dragoons had hit home they would have cut the Militia down easily allowing my Line to brush aside the State Line and Continentals but such are the fates of war!
Posted by Zanoni at 03:22 No comments:


Having become a recent convert to 'Sharp Practice' I thought I'd try 'Chain of Command' and quickly built up a force for the BEF from Warlord Games.

The force represented the Durham Light Infantry and consisted of an headquarters group, a couple of 2" mortars, 4 sections of infantry, a Vickers MMG group, a Bren Carrier team and a Matilda tank.

For their first outing one of my regular opponents, Dave, kindly agreed to give me a game with his 1940's Germans. We decided to play Scenario 3: attack and defend with the DLI attacking and the Germans defending. The terrain consisted of a Village of four buildings with a road running through it and a number of fields and woods.

In the patrol phase the Germans managed to advance past the first couple of buildings giving them the ability to deploy into them.

Initially I deployed No.2 section behind one of the buildings: 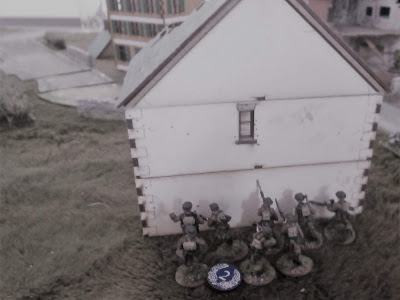 The Germans held back and didn't deploy anything leaving me unsure as to where they would pop up from!
I then deployed the Matilda and the Bren Carrier, putting the Matilda on over-watch to cover the far left building in the village. 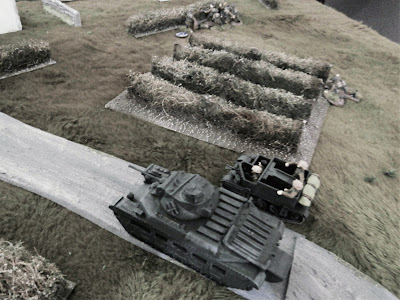 Still there were no signs of life from the Germans. Where were they?
No.3 section then deployed on my right flank behind a hedge with one of the 2" mortar teams. The arrival of No.3 section at last drew a response from the Germans with heavy fire coming from the damaged building in the village and the building on my far left. No.3 section started taking casualties The Matilda opened up on the far left building and inflicted some losses on the Germans in return.

No.3 section was joined by the Vickers MMG and began to pour fire into the damaged building with some success. 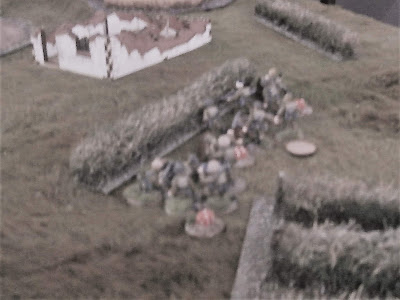 The Matilda continued firing HE at the building on the far left supported by the 2" mortar and inflicting more losses on the German section holding it. However, No.3 Section was now taking heavy losses and were forced to go to ground leaving just the Vickers to keep up return fire.

To try to take the pressure off No.3 section I deployed No.1 section on my left flank in an attempt to take out the remaining Germans in the building on my far left. 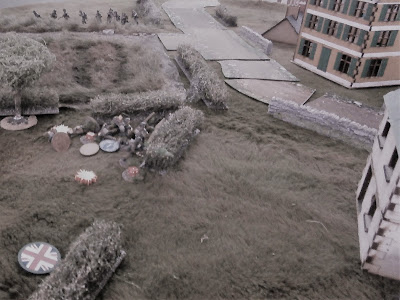 While this did momentarily ease the pressure on No.3 section another group of Germans appeared behind the field on my left in a position to outflank No.1 section which started taking a lot of hits from the newly appeared Germans.

Both sides were now under pressure with losses mounting rapidly. To try to finish off the Germans in the village I ordered the Matilda and the Bren Carrier to advance down the road towards the centre of the village. 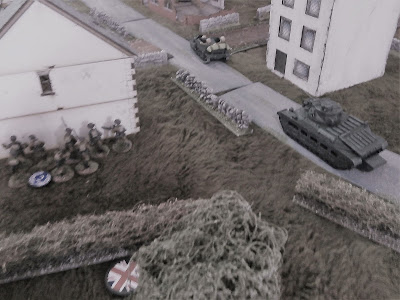 The Germans were quick to respond with an infantry anti-tank rifle squad ambushing the Bren Carrier and damaging it's Bren and a 37mm AT gun appearing on the far edge of the village which also targeted the Bren Carrier which was fortunate to survive a couple of shots with limited damage.

Losses now became unsustainable for both the Germans in the far left building and No.1 section both of which were forced to retire. The Germans in the right hand village building were only just hanging on while No.3 section and the Vickers were wavering as well.

With both sides close to defeat I decided to try to assault the right hand village building with No.2 section which had been in reserve since deploying at the start of the game. 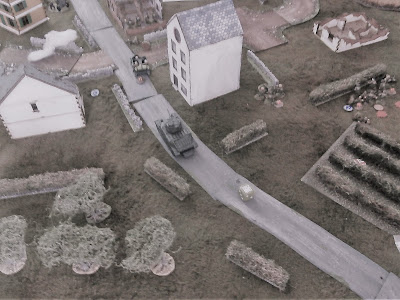 No.2 section rushed across the road and entered the German held building, quickly finishing off all the survivors and taking control of it.

With this the German morale finally broke and they withdrew from the field leaving the battered DLI to take the village.

I really enjoyed this game and thought that there was a little more to think about than in Sharp Practice. The patrol phase was interesting and the interaction between both sides deploying troops and deciding where to activate units gave a lot of options.