The last few components for the firebase I've been slowly building up for The Men of Company B arrived and quickly got painted up. Most of it is resin models from Britannia apart from two of the bunkers and the Helipad which I made myself:

A close-up of one of the corner bunkers: 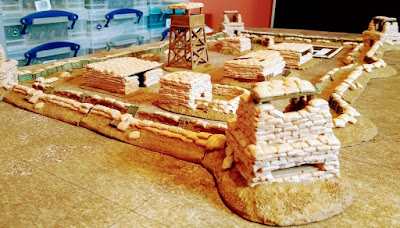 I don't really want to think about how much it cost though the financial pain was lessened by ordering it in several stages! I like the models and it is noticeable how much more detail resin cast models have compared to the fashionable MDF buildings that lack a lot of texture (at least without a lot of work doing to them).
If I try to get other people at the club interested in playing TMOCB it will be easier to carry to the club than the jungle set up and perhaps I can use some of the trench sections for Chain of Command, while slightly smaller being 20mm scale they look okay with 28mm figures so hopefully it will get some use and I will certainly play a few solo games with it at least.