The last additions to my forces for 2020 are some more tanks for my Early War Soviets for Rommel. Andy found a whole load of scenarios on the web for Barbarossa which required a few tanks I didn't already have. All of these are from Pendraken.

A couple of BA6 armoured cars:

Finally the HUGE T-35 tank, sadly not as efficient in the rules as it looks: 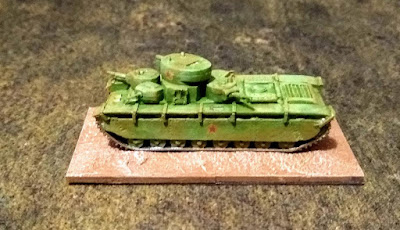 I should now have enough Russians to do most Early and Mid War battles with a few extra for Late War scenarios. Early War Soviets are truly appalling in the rules so it will be interesting to see how they play out....